It has been little less than a year since I posted my last blog. So, I should give a quick personal update. I have been doing professional ghost blogging for lawyers and law firms. Doing independent blogs has been good for my writing and blogging since I had to write on limited topics for other parties. It stretched my abilities. It has been a tough year, which has prevented me from posting to this blog. But, as they say, what doesn’t kill you makes you stronger. 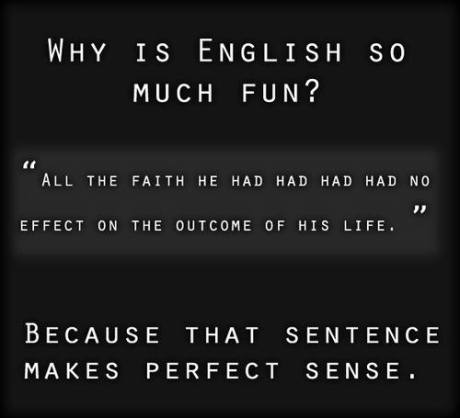 The confusing sentence, “All the faith he had had had had no effect on the outcome of his life,” is actually a grammatically correct sentence. There are two instances of “had had” both in the past perfect form. The first instance act as a modifier in the subject of the sentence, and the second instance is the main verb of the sentence.

The past perfect is a past action that happens before a second action. For example, think of the sentence, “When Bob asked me out to dinner, Jeff had asked me to the movies.” The past perfect “had asked” signals that this happened before past verb “asked.”